10 curiosities of Andalusia that you did not know 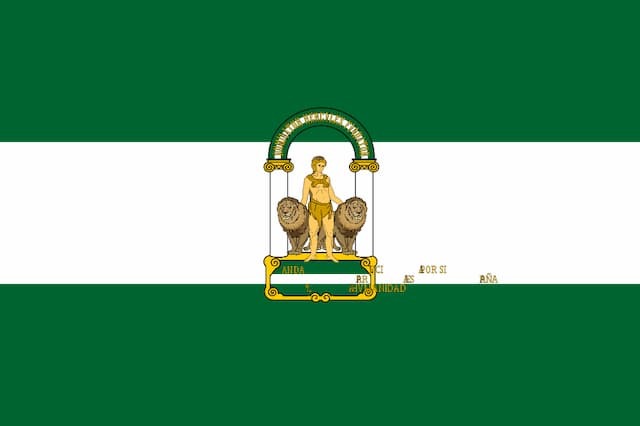 Who has never visited Andalusia? On vacation to its magnificent beaches, to get away to see its wonderful cultural and artistic wealth, direct to try its great local cuisine, Andalusia has much to offer us and we never tire of doing rural tourism for its lovely lands. Taking advantage of the good weather and the desire we have to go running there we will take a brief tour of some of the curiosities and highlights of the community. How many of this data did you not know?

It is time to meet 10 curiosities of Andalusia that you probably have not heard.

The Andalusian flag is formed by three horizontal stripes of the same width of green, white and green. These colors, according to their history, in addition to representing the lands of Andalusia try to convey purity and hope. For the creator of this symbol, Blas Infante, also known as the father of the Andalusian homeland, green refers to the Andalusian dynasty of the Umayyads while white is interpreted as peace and dialogue. In the shield that we find in the center of the flag, Hercules is represented holding two lions between columns, since this mythological character according to legend lived some of his feats in Eriteia, an island that is located between the current Cádiz and San Fernando.

This flag was approved by the Assembly of Ronda in 1918.

It is the most populated Autonomous Community of Spain

In its area of ​​87,599 km2 it is one of the largest communities in the country, in addition to the most populated. In this territory, 8,426,405 inhabitants reside, approximately 18% of the total Spanish population.

Donkey taxis were born in Mijas in the 60s. At this time there were many tourists who chose the town to spend the summer. There they were surprised to see the workers return to their donkey-mounted houses, so they were asked to be able to ride them to take pictures and have a memory. From then on they became a very famous form of transport in Mijas that still remains.

If you have not seen them, you can go on vacation to Mijas and try the donkey-taxi for yourself.

The Malaga fair originates on August 19, 1487, when the province joins the Crown of Castile of the Catholic Monarchs.

It is celebrated from August 15 and tourists from all parts of Spain go to it. You can start making your reservations. In Seville, in April it is also the most famous in the community.

How is rural tourism in Andalusia?

The rural houses of Andalusia were the third most demanded by travelers in what we have been in 2019, behind Catalonia and Castilla y León. Within the region, the province most in demand by rural tourists is Malaga, followed by Cádiz and Granada. Do not forget to book your rural house on our website.

Andalusia has seen us born to a multitude of artists with fame throughout the national territory and some also abroad. The Andalusians are said to have an elf, an innate talent for music, singing and widespread artisteo. Therefore, the world of flamenco is tremendously represented in this territory with legends such as Lola Flores and all her descendants of artists, Camarón, Paco de Lucía, José Mercé, Manolo Caracol, Diego el Cigala, Enrique Morente, Remedios Amaya, Estrella Morente or Jury dew. Outside flamenco we must also name the world-famous Raphael, a native of Jaén, Manolo Escobar, María Jimenez, Miguel Ríos or the huge Joaquín Sabina.

In our cinema and television screens we also see a large number of Andalusian actors every day. Undoubtedly, the most recognized is Antonio Banderas, since he has made his native Málaga famous in all corners of the world. Other greats from the world of acting that were born in this region are: Paco León and his sister María León, Juan Diego, Inma Cuesta, Mariano Peña, Pepón Nieto, María Galiana, Antonio de la Torre, Alex O'Dogherty, Pablo Carbonell or Juan Luis Galiardo.

In Malaga there is a "paranormal route". Mysterious places like the central Salvago street or the Nicasio.

But also some towns like Macharaviaya, have their particular paranormal episode. They say that those buried in the Gálvez Crypt often leave it converted into spectral beings to avenge all the inhabitants of the town.

The most common last names of each province are: García (Cádiz, Córdoba, Granada, Jaén, Málaga and Sevilla), López (Almería) and Rodríguez (Huelva).

Spain is the world's largest producer of olive oil and, within the country, 85% of Spanish oil comes from Andalusia. Its agricultural area is covered in 30% of olive groves and only in this region 32% of the world's oil is produced. Depending on the type of olive oil is produced in one area or another of the region. The picual or marteña variety, which is the most common, is grown in the Jaén area and accounts for half of the Spanish oil production. Hojiblanca and picuda varieties are grown in Córdoba and Málaga.

And you, which ones do you know? If we have left any in the inkwell, tell us!